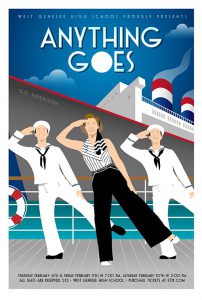 This Cole Porter masterpiece is a colorful assemblage of passengers including Reno Sweeney (Micayla McDougall) a popular nightclub singer and former evangelist, her pal Billy Crocker (David Pinker) a lovelorn Wall Street broker who comes aboard to try to win the favor of his beloved Hope Harcourt (Allie Leonard) who is engaged to another passenger, Sir Evelyn Oakleigh (Matthew Aldinger). Second-rate con-man, Moonface Martin, aka “Public Enemy #13” (Matt Cabilis) and his sidekick, Erma (Emily Augello) are also on board. Song, dance, and farcical antics ensue as Reno and Moonface try to help Billy win the love of his life while avoiding the clutches of a bombastic boss, Elisha Whitney (David Pugh), and an overbearing mother, Evangeline Harcourt (Emma Flaherty). Anything Goes will leave you laughing and dancing out of your seats.  The complete list of cast, pit orchestra, and crew can be found below.

The musical is directed by Kristyn Sperduti, produced by Andrea Scerbo, choreographed by Andrea Leigh- Smith.  Anthony Alvaro is the music director; William Mercer, Jr. is the lighting director; Matthew Makowiec is the technical director; Corey Hobin is the Sound Director; and costumes have been designed by Cindy Kissane and Lisa Mason.

Tickets can be purchased in advance at etix.com or at the door. All seats are reserved and are $12.