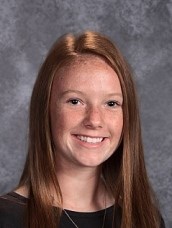 She will move forward to the World Competition being held online on July 16-17.

The contest was recorded and we will add access to that recording when it is made available.

On January 29, seven students gave speeches around the theme, “Just Imagine a World without Boundaries” to members of the Camillus Optimist Club.  The Optimists chose Christina Van Allen and Hannah Craybas from the high school in the top two spots, respectively.

Both students will now compete at the next level of the 2020 Oratorical Contest that will be held in April in New Hartford, NY.

Also competing were Shannon Flynn and Logan Battaglia from the high school; Riley Kittle from West Genesee Middle School; along with Sienna Baron and Oliver Rufa from Camillus Middle School.