Join Camillus Middle School as we set forth on a mythical “once upon a time” trek in Shrek the Musical! 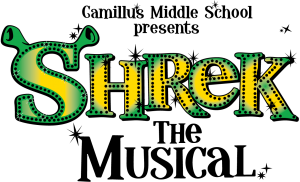 The story of a hulking green ogre Shrek (Angelo Procopio) who, after being mocked and feared his entire life by anything that crossed his path, retreats to an ugly green swamp to exist in happy isolation.

So, Shrek strikes a deal: I’ll get your homes back, if you give me my home back! On his way to meet Lord Farquaad, he saves his soon-to-be side-kick, Donkey (Daniel Alvaro), from the Captain of the Guards (John Diem) and his guards. However, when Shrek and Farquaad meet, the Lord strikes a deal of his own: He’ll give the fairy-tale creatures their homes back, if Shrek rescues Princess Fiona (Cynthia Schlenker).

While attempting to save the Princess, he and Donkey discover a fire-breathing Dragon (Amelia Rufa) who protects her from would be suitors. Shrek saves Fiona and finds something strange and different–about this pretty princess. He likes her. A lot. But why does she always run off when the sun sets?

Drama/Music Direction and Productionis  by Don Schuessler; Choreography is by Heather Molina; Costume Design is by Cindy Kissane; and Set Building/Painting is Design by Jeffery Bowe, assisted by Jenny Gettino.

Tickets are $8 General Admission at the door, and the doors will open one hour prior to each show.