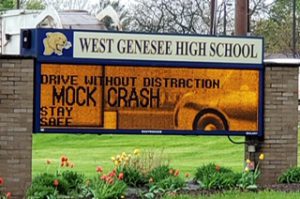 Due to rain, the presentation was moved to the lower gymnasium and modified to an assembly about making safe choices. 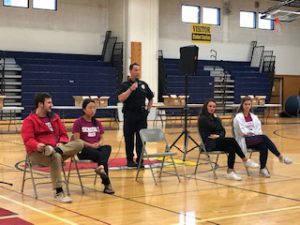 As a reminder of what can happen with a wrong decision, Captain Nightingale pointed out an empty chair among the students in front of him. He asked them to, ” look around and imagine one of your friends missing after tonight”.  A very powerful message! 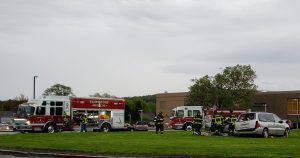 Although they were unable to attend the full presentation outside, the crashed cars that would have been used in the simulated demonstration remained in the front circle for the remainder of the day. These cars were processed by the Fairmount Fire Department to remove the tops of the cars to demonstrate what would happen if this was an actual crash.