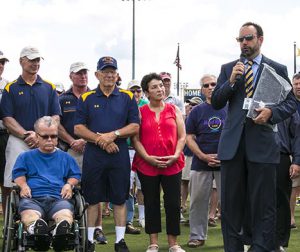 After 43 years as the West Genesee Boys Lacrosse Coach, Mike Messere is retiring. Along with him, his Assistant Coach for 37 years Bob Deegan decided he would also step away from coaching at the end of this season.
Three years ago the National Interscholastic Lacrosse Coaches Association presented their 2015 Man of the Year Award to Mike Messere.

At that time, and still today, he holds the record as the winningest coach in Lacrosse at any level finishing his career with 846 wins, including 15 state titles, with only 85 losses. Many of those West Genesee teams have been ranked #1 in the state of NY over 15 times and on a national level, his teams have been ranked #1 over nine times by various publications and organizations.

Besides Lacrosse, Coach Messere has coached football, wrestling, soccer, and weight training at the high school.

In 2015, the District officially named the West Genesee High School turf field, “The Mike Messere Field” in his honor. Pictured below, Superintendent Dr. Christopher Brown presents him with a plaque to commemorate the event.

As their tenure comes to a close, we wish Coach Messere and Coach Deegan well in their retirement and congratulate them on their legendary coaching careers