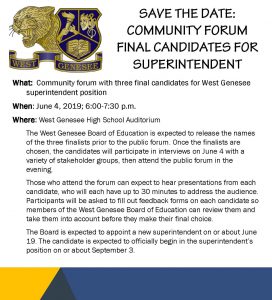 Save the date! The West Genesee community will be invited to hear presentations from three final candidates for the superintendent’s position from 6:00 to 7:30 p.m. on Tuesday, June 4, in the auditorium of West Genesee High School.

The West Genesee Board of Education is expected to release the names of the three finalists prior to the public forum. Once the finalists are chosen, the candidates will participate in interviews on June 4 with a variety of stakeholder groups, then attend the public forum in the evening.

Those who attend the forum can expect to hear presentations from each candidate, who will each have up to 30 minutes to address the audience. Participants will be asked to fill out feedback forms on each candidate so members of the West Genesee Board of Education can review them and take them into account before they make their final choice.

The Board began its search for a new superintendent on March 6, when it appointed Onondaga-Cortland-Madison BOCES District Superintendent Jody Manning to serve as the District’s search consultant at no charge. Manning, who has helped several Central New York districts conduct superintendent searches, said the West Genesee Board of Education received 11 applications for the position, mostly from candidates in New York State. He said the number represented a “typical and healthy” number of applicants.

The District is currently being led by Interim Superintendent Michael Schiedo, a retired superintendent from the Chittenango Central School District.

Click here for information about the three final candidates.