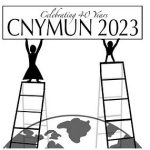 The 40th annual Model United Nations (UN) Conference was held on January 6-7, 2023 at Syracuse University and was attended by students from across the state.

Each student is assigned to a committee where they work to resolve a societal condition by negotiating with other members. Each member must represent their country’s position and maintain, to the best of their ability, their status in world affairs.The keynote speaker was John D. Palmer who spoke about issues of Race and White Supremacy; Equity and Social Justice Education Policy and Practices; and Forgotten, Isolated, and Oppressed Schools.