The Camillus Middle School Library has been selected by the Central New York Library Resources Council as a recipient of a traveling exhibit commemorating the centennial of women’s right to vote in New York State. 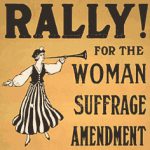 The library will be transformed into an “interactive museum” for the month of April to raise awareness of the struggle for women, particularly the suffrage movement. The exhibit will feature 16 various stations whereby museumgoers can enjoy a variety of hands-on activities. Some of the highlights include a voting booth with a daily debatable question, authentic student projects,  a fashion exhibit, photo booth, a gallery walk of art, an interactive map of the NYS Heritage Trail, and makerspace projects such as megaphones and sashes.

Open House for the Community 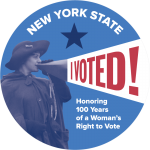 The library will host an Open House on Monday, April 16 beginning at 7:00 p.m. It is open to families, students, staff or anyone in the West Genesee community who would like to tour the exhibit.

During the open house, special guests will be on hand and refreshments will be served. Everyone is encouraged to attend to learn more about women’s suffrage and to celebrate the centennial of women’s right to vote.

Continued coverage of the event can be found on our website; https://www.westgenesee.org/academics/west-genesee-libraries/cms-library/