Home › Archive › US Army Field Band to Perform in Camillus 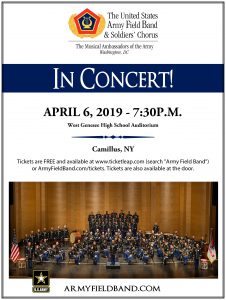 The U.S. Army Field Band and Soldiers’ Chorus will stop in Camillus during its spring concert tour with a performance on April 6 at the West Genesee High School Auditorium. The performance begins at 7:30 p.m. and is free to the public.

At the direction of Commander Jim Keene, the performances give the Army Field Band the opportunity to connect with Americans in their hometown and tell the Army story.

“We honor the fallen and recognize all veterans who served their country,” said Col. Jim Keene. “As we present patriotic favorites, we know Americans will be filled with pride in our soldiers and in our nation.”

MEDIA ONLY: If you are interested in covering a concert, speaking to a member of the ensembles or having members of The U.S. Army Field Band on your show, please contact Elizabeth Peace.

About The U.S. Army Field Band:

The U.S. Army Field Band tours nationally and internationally as directed by the Department of the Army, and serves as the liaison between the Army and the American people. Its primary mission is to connect America to its Army through the universal language of music. The Army Field Band consists of four performing components and a far-reaching educational program. Each concert tour is sponsored by a local organization with the mission of supporting local community events such as centennial celebrations, festivals, and city and state commemorations. To become a sponsor or for more information, visit www.ArmyFieldBand.com.