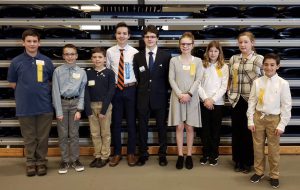 Over 250 students participated this year and each student utilized their own school projects from science fairs held earlier in the year. Awards were given at honors, high honors, and highest honors levels. In addition, there were special awards given by local businesses, professional societies, and educational organizations judged by a set of specified criteria.

Liam O’Connor: (An Exploration Into the World of Ants)

Maxwell Broccoli: (Light it up Tesla)-Participant

Evan Perkins: (Flying a Drone in a Moving Vehicle)-Participant

Victoria Collins: (The Science of Slime Fun With Polymers)

Congratulations to all who competed.