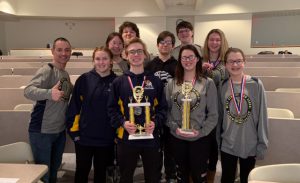 The NYS Academic Decathlon competition originally scheduled for February 7-8 in Brockport was rescheduled due to weather. It was held on February 26 at West Genesee High School.

The Super Quiz format was changed from individual to team scores. West Genesee earned 3rd place in the super quiz, as well as 3rd place overall at the state competition. Cazenovia earned 1st place and will compete in the national competition in Alaska.

West Genesee earned  a total of 15 medals and a MVP trophy. 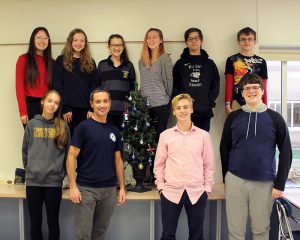 The Academic Decathlon was held at Westhill High School on Saturday, January 18 with competitors from Cazenovia, Tully, Westhill, and West Genesee high schools.

The team from West Genesee High School came in third overall with a total of 11 medals. Cazenovia came in first and Westhill came in second. The top three teams will advance to the state competition at SUNY Brockport to be held on February 7-8.

Individual medals were awarded for the highest scores on eight objective written tests in music, art, language, social science, science, mathematics, and economics (super quiz was cancelled as the event was abbreviated due to bad weather).

Their coach, Kevin Misiano, is a WGHS Mathematics teacher, who has been meeting with the team since the fall to prepare for the Decathlon.

A school’s team is composed of three “A” students (honor level), three “B” students (scholastic level), and three “C” students (varsity level).  All take the same academic tests, but trophies are given for the top three individual scores in each level.